The Impact of #MeToo on Reporting Workplace Harassment

According to the U.S. Equal Employment Opportunity Commission website, their mandate is to be “responsible for enforcing federal laws that make it illegal to discriminate against a job applicant or an employee”, providing a valuable service on the Federal level for businesses and employees. For decades, the EEOC has tracked the types of employment discrimination charges filed with their agency. With the rise of the #MeToo movement in 2017, more and more people have felt empowered to report issues in the workplace and bring stories to light.

A recent Society for Human Resource Management (SHRM) article covered how the EEOC's number of discrimination claims specific to the categories of “Retaliation” and “Sex” rose in 2018. For this year, the EEOC reported that the percentage of charges had increased from the previous by 2.8%. Yet that isn’t the most telling statistic. Retaliation-based discrimination made for a whopping 51.6% of all charges filed in 2018-- nearly 40,000 in total--- according to the agency's findings. In this context, "retaliation" is used when people experienced discrimination after reporting harassment or rejecting the advances of someone else at work. Closely behind, the EEOC’s tracking also found that almost 33% of charges filed were related to sex (gender) discrimination. These are telling numbers. 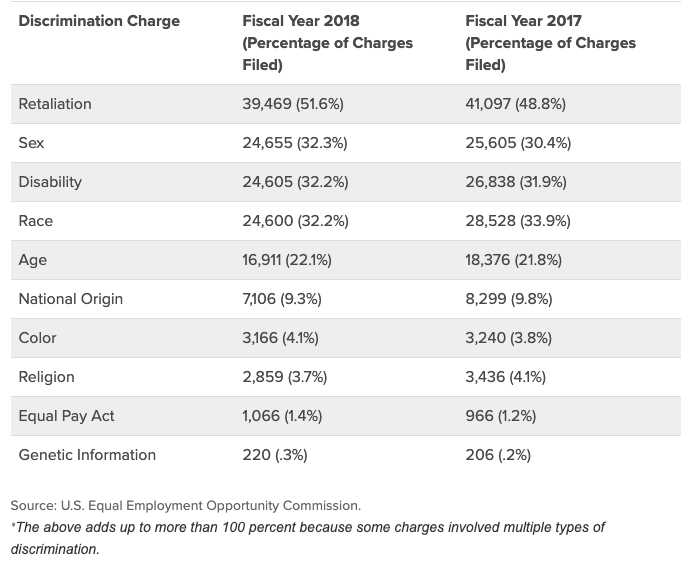 While the fact that such discrimination happens in the workplace, and does so independent of the type of business or organization, one positive is the impact of the #MeToo movement in showing those who feel discriminated that their stories matter and their voices will be heard. Many people fear retaliation for filing claims or reporting issues to management. One way businesses can deal with these worries is to offer anonymous reporting tools. Text messages are helpful in allowing employees to express their concerns because most everyone has a phone at his/her/their fingertips.

That’s where a tool like VoiceSifter can be of use in its HR Ethics line option. Using the same technology as companies like Uber and Airbnb, our anonymous reporting line gives people the chance to share their stories without fear of retaliation because, unless that employee chooses to reveal their identity, they can report discrimination, ask questions, or share praise without being identified. Curious to learn more about VoiceSifter? Request a demo here.

While employers review their policies to make sure the way claims are recorded and followed up on remain most beneficial to those reporting them, an additional tool like VoiceSifter gives further assurance. Yet, no matter the tools used, it is very encouraging to see how many people continue to come forward with various stories of discrimination so that workplaces can adapt their culture to take action to prevent and properly respond to it.

It is no secret that every...